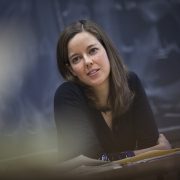 So the important thing to know from the start is that she was miserable.  She hadn’t always been, of course.  She’d gotten married in a flurry of sex and promises, wearing a white dress so hideously confectionary that she felt like a parody of herself, a joke told in crinoline and lace, and even that made her happy, because it was silly and she knew they’d laugh about it later.  Which they did.  Then they had a baby, who was beautiful and perfect, then later on became less beautiful, less perfect, in fact troubled, for a time Ritalin- and methamphetamine-addicted, but subsequently, amazingly, pulled himself together and managed, despite the rocky years, to graduate from college and find a decent job at a zoo, tending to the turtles.

This is the opening paragraph of the first story Alix Ohlin ever read at a Warren Wilson residency in July of 2008. She remembers being nervous to read—not only because she was reading to a new community of students, but also to faculty members, many of whose work she had admired from a distance for years. When she started reading though, she felt an “amazing, palpable attention in the room.” She thought—and I believe anyone who has stood to read in front of the Warren Wilson Community can attest to this—“Wow, this is what listening is. It was terrific.”

Also terrific is this: four years later, this same opening paragraph has become the title story of Ohlin’s new short story collection Signs and Wonders, one of two new books—read that again—two new books out as of June. Inside, the second of the two, is a novel that follows the lives of three main characters, all intertwining and searching.

Six years have passed since Ohlin’s first highly acclaimed novel and collection of short stories, The Missing Person and Babylon and Other Stories respectively, were published, and I asked her if she felt like her writing had changed between then and now. She said that each of her books were different:

“I don’t know if the difference represents an evolution so much as me experimenting, trying to take risks. My first novel is an environmental comedy and because of its themes, landscape is important in it, and voice. The books I used as models of form (The Mysteries of Pittsburgh, The Moviegoer, The Heart is a Lonely Hunter) were mostly coming-of-age stories with a confined place and time. In this new novel, I tried to work on a more expansive canvas; there are four points of views, six locations, and ten years. The models (To The Lighthouse, The House in Paris) tended to play around a lot with structure and time, which is something I’m really interested in. In terms of stories, I like to try out different forms. It’s fun to be playful with the structure in a short story. So the first book has stories in the form of a medical transcription report and a scientific paper, while this new book has some experiments with genre: a ghost story, a murder mystery.”

Though Ohlin said it might sound sappy, Warren Wilson is the writing community she’s looked for all of her life. Teaching there has brought greater rigor to her writing life and has given her a “more thoughtful language with which to conceptualize” her own work. When she was preparing to return to Warren Wilson to teach at July’s residency, I asked her what she was looking forward to the most. “The great food and the comfortable beds, of course,” she said. “Also, I get in a rut with my own thinking sometimes and in every residency without fail, there will be several ideas that set my brain on fire and make writing fresh again. So that. And seeing everybody. And dancing.”

Alix Ohlin will continue to read from her two new books this fall. For full details, visit her website at: www.alixohlin.com/events.