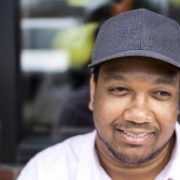 Tommye Blount (poetry, July ’13) was born and raised in Detroit. A holder of the Holden Scholarship, his poems have appeared in Poetry, New England Review, Vinyl Poetry, Connotation Press, The Collagist and Upstreet. He is a Cave Canem Fellow and lives in Novi, Michigan.

Would you say a bit about the role poetry played in your life before coming to Warren Wilson?

These days I see teenagers writing fierce poems with a secret streak of jealousy, because I did not take poetry seriously until my early twenties. I had no idea who Diane Wakoski was when I signed up for her poetry class at Michigan State University. By the end of the semester, I was sure of two things: Diane Wakoski’s brilliance; and my immense need to be a poet. It wasn’t until I met poet Vievee Francis that I learned about the kind of work and self-discipline poetry (and all writing for that matter) demands.

It was through Vievee that I heard of Cave Canem—an organization dedicated to the enrichment of African American poetry. Cave Canem was found in 1996 by poets Cornelius Eady and Toi Derricotte. Between Vievee’s tutelage and the residencies at Cave Canem, my sense of self as a poet and a human being (which is just as important) were shaped before I arrived to Warren Wilson.

How did you find the program?

Flat out, if it were not for poets Jamaal May and Matthew Olzmann, I would have never heard of Warren Wilson. Matthew, along with his wife Vievee, have been great influences on me. So hearing Matthew talk about the rigor of the program and seeing the change in how he talked about poems was remarkable.

It’s the same with Jamaal—being intimately familiar with his work before and seeing his work during the program made all of the difference to me. Not to mention, the way he articulated the intention behind his poems blew me away.

Do you remember what it felt like when you got accepted into the program, and that the acceptance included the Holden Scholarship (to interrupt myself. What I think I’m trying to get at: there’s a significance for the recipient of such help that goes beyond the easing of the financial burden. So I’m wondering if there was anything like that for you.)?

When Ellen called me with an acceptance, I was driving home from work. First of all, Ellen Bryant Voigt was talking to me. Me! Like two weeks before that, I was reading her poem “Hound” on the back cover of American Poetry Review, and then there was her gorgeous voice pouring out of my phone into my lowly ear. My body had ran cold, because this kind of thing just didn’t happen to me. I mean, who did I think I was?! After I hung up, I think I sat in my car for about an hour, excited and shocked.

And, Adam, don’t downplay the ease of the financial burden. Soon after the call, I started to worry myself sick on how I would pay for tuition. No way did I think I would be awarded the Holden Scholarship—what an honor. Have you seen the roster of Holden fellows? Prior to coming to Warren Wilson, I knew Reginald Dwayne Betts (2010) and A. Van Jordan (1998) and how absolutely masterful their work was. There was a pressure (self-imposed pressure of course) to work even harder. For me, the receipt of the Holden Scholarship charged me with the onus of proving to myself that I deserved this opportunity; deserved to be among this wonderful community. This onus remains with me even now.

A year and many big-deal publications have passed since your graduation from Warren Wilson MFA. Are there any particular aspects of your time in the program that especially stand out?

My supervisors meant, and still mean, the world to me: Gabrielle Calvocoressi, Martha Rhodes, A. Van Jordan, and C. Dale Young. There isn’t a day that goes by I don’t think of their effects on my work; on me. And there is also this strong sense of community that I did not expect from a low residency program. I tell you, I have made friends at Warren Wilson that I consider family now.

What has writing after the program been like? Do you hear the voices (not in the Girl-Interrupted way) of certain teachers or fellow students as you compose and revise?

Here is the wonder of Warren Wilson—it never forgets you. It’s crazy, because it always feels as if my supervisors are all taking shifts on who will contact Tommye next to give him a bit of a nudge. They remind me that there is always work to be done; there is no settling. To answer your question: yes, I actually hear their voices. Ha! And then that community of cohorts I spoke about earlier, they are also out here holding me accountable. During the program, people always told me that Warren Wilson isn’t done with its students after graduation. I never knew how true that was until now.

In light of your accomplishments, does it feel as though things are coming together for you as a poet? Like there’s momentum?

My temperament is such that I don’t think I will ever feel as if things are coming together for me as a poet. Writing is hard. It isn’t uncommon for me to stare at a blank page for an hour and end up with nothing. Sometimes I give up for weeks. I always feel as if I do not have another poem in me. And, funny enough, it is all of this that keeps me returning to the page. Yes, publication is always wonderful, but proving myself wrong, telling myself that page will not be blank forever, is what truly drives me to keep writing.

By year’s end, I am hoping to finish up my first manuscript and start the second.

Friends of Writers endowed the Holden Scholarship and provides a range of other financial support to students in the MFA Program for Writers at Warren Wilson College. Follow this link to add your support to Friends of Writers: http://friendsofwriters.org/donate/

An Interview with Alumna Serene Taleb-Agha
Scroll to top