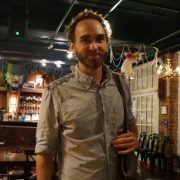 The Rules that Govern this Realm: Margaree Little in Conversation with Brian Blanchfield

Your second book of poems, A Several World, received the 2014 James Laughlin Award from the Academy of American Poets and was longlisted for the 2014 National Book Award. But you’re currently focusing on prose, and a book of essays, Onesheets, forthcoming from Nightboat Books. Could you talk about Onesheets?

So “onesheets” are single-subject essays that take no recourse in authoritative sources— I think through the topic at hand and report on what it is I know or estimate or remember or misremember about it. And about each subject I begin with some notion that there’s some hot territory in it for me, some dicey personal territory. So even if I may not quite know what that is, I trust that the process, in these 2,000-word essays, (3,000 tops), I arrive at this rather naked place and report from there. Some of them very much need a loincloth.

The subjects are all over the place—miscellany is part of the project and hopefully part of the joy of it—they’re about foot washing, Br’er Rabbit, the locus amoenus in the pastoral tradition, tumbleweed, house sitting, the Leave in billiards. But yes—I’m the single source of the essays, which feels like it connects with the oldest traditions of essaying, a kind of radical empiricism that’s not about getting it right, and that performs thinking on the spot.

In The History of Ideas, 1973-2012, the sequence that makes up the third section of A Several World, each poem opens with an epigraph from The Dictionary of the History of the Ideas, and closes with a quote from a contemporary popular thinker—Antonin Scalia, Malcolm Gladwell, Thomas Friedman. Yet if the ideas at either end of the poems read as proclamations, the intervening poems are anything but. How would you describe the poems’ relationships to the ideas they quote?

The poems, yes, have an epigraph and a “postgraph.” The formulation of fact at the beginning of each poem, taken from The Dictionary of the History of Ideas, and the aphorism at the end, snatched from our own contemporary moment—those came first. Then it was a matter of thinking of 1973 to 2012 as a span, a kind of landscape, and I would very loosely consider the task to update the history of that idea, since the Dictionary was published in 1973, which was also the year I was born. And I think most of those poems derive a little scene or situation there, like a snow globe to look in on.

Is that part of how the book enacts the Herrick poem (“Here we are all, by day; by night we’re hurl’d,/ by dreams, each one, into a several world”) from which you drew the title?

I decided that the Herrick quote would go best on the title page introducing The History of Ideas for that reason; I felt like that was the place where “by night we’re hurl’d/ by dreams each one, into a several world” felt truest.

But the front part of the quote in a way is more material to the whole book. You know, here we are all by day, here we are whole, in public life, and then the fact that we individuate in this extreme way, we go to a place that’s irretrievably private and individual, undermines the fleeting or fictional idea of a body politic, shows how precarious that might be.

You’re originally from North Carolina, and the son of a long-haul truck driver, and I think I read that one of the early experiences that led you to writing was your habit of making complicated maps while your father was away. Now, after living and teaching in New York, Los Angeles, Boston, and Missoula, you’ve settled in Tucson. These various landscapes feel central to A Several World—the poems evoke a range of places, and some of the poems are overtly working in relationship to the pastoral tradition: there are eclogues and idylls, and poems placed at the edges of different bodies of water.

You’ve described these poems as “participating in a kind of reclamation of the pastoral’s queer origins…updated to and affronted by our postpastoral moment.” Could you say more about the “queer origins” of the pastoral? Why was this form compelling to you?

For me at least, maybe for a lot of people, I came to Theocritus late, and Virgil. And for me the big news there was the disinhibited sexuality of these shepherds to whom these poets would give identity, this space of un-stigmatized, amative free sexuality, hot for Phyllis, hot for Alex equally.

And so as someone born in the 20th century for whom that wasn’t true, in North Carolina, it’s become a sort of cause to keep signaling back to that as origin, that very influential tradition in lyric poetry, and to remember it, in the otherwise really vexed and objectionable history of what gets called pastoral.

The three eclogues in the book very loosely adhere to the tradition of eclogue, which is often a monologue or a dialogue between representative shepherds. There’s an available queer identity in these poems, and a really contemporary context. That was something not that I set out to do, but that now seems to me part of a reclamation project that I see other poets doing, too—D.A. Powell, Carl Phillips, G.E. Patterson.

I wonder if you could talk a little bit about how you were working with perspective, and shifts in perspective, in the book. I’m thinking of moments like this one, from “Man Roulette”:

Is this even a booth? In this booth there is
room for one. Get in here and hold me up.
I would fall without you. Why are we not told plainly?
What good as a booth is this, what booth if it be one?
Feel the first drop, as from a shearwater ocean bird held high
for miles on the cyclonic air, blown far inland, never
otherwise seen.

That’s such an astonishing movement, from the enclosure of the booth with “room for one” out to the ocean. You’ve mentioned this kind of aerial vantage point as a sort of dream, not something anyone can ever really achieve, and yet it feels enacted in moments like these.

I shouldn’t say it’s something I was really conscious of in this poem, but I do know that along the way in writing this book I became aware of shuttling between an on-the-ground, in-the-weeds perspective, and this fantasy of drawing way up high and being able to see the whole thing in full. And I think that there are certainly poems, including this one, in your reading, that operate that way.

I mean, don’t you feel like you always want that ability to lift out and lift up and see not only where you are on the map but where you are in your life and what’s ahead? There’s a whole tradition of prospect poetry, where to attain that high vantage, which was a Romantic ideal, was to attain some other greater perspective too. So I hope that the poems are critiquing some of that and also, in the shuttling back and forth, activating that fantasy mechanism.

It’s related, to me, to your question about maps, about making maps as a kid; my dad was a truck driver and yes, I have speculated that I was probably making those maps as a way at age seven, eight, nine to gain control over his absences.

But it does feel to me now like it was related to writing poems. What I would do—if you’re interested—I’d get my Etch-a-Sketch and I would close my eyes and I would dial in some kind of diagram. Turning the two knobs I would make lines across the screen with my eyes closed for a long time, and then I had this practice of taping together 8 ½ by 11 sheets of paper, notebook paper, a great grid of them, and I would fastidiously transfer onto this new grid the lines from the Etch-a-Sketch. You know: a top-left to bottom-right stroke, crossed by this other stroke, and these would be the roads or boundaries or waterways. I had then set up some space, I had set up a world, and a game could happen there.

True too about the poems; they’re preparations, they’re procedurals, whether anyone hits run on the program or not.

You’ve participated in different kinds of collaboration, in both dance and poetry, and two of the poems in A Several World are from a longer sequence of poems you wrote with Richard Siken. What comes to mind is a phrase you used in another interview, “mutual regard.” How has doing collaborative work informed your teaching? What do you think mutual regard can mean, when there are so many barriers to it?

I have my students do a lot of prompted writing, and one exercise I think of as mapping. You’re mapping the rules that seem to govern this realm. I got it from Chuck Jones, the cartoonist, who when making the Road Runner decided that there were nine rules he and all the cell animators working on the cartoon had to follow (e.g. Any implement not native to the Southwest American desert must arrive in a crate from the ACME corporation), and those were the parameters of each and every episode that ever aired. So I show my students that, and then reading a poem that has a certain complexity or resistance, we each write out what rules seem to govern this composition. Then put the poem aside and you have only your nine rules, and that can be a kind of script or score for your next poem. So in that way I have them kind of collaborate with another pre-existing work of art.

As to mutual regard—in a collaboration it’s interesting, because you’re often asked to release your idea of completion, you’re giving your material in a state that pleases you to someone else whose charge is to reshape and strike out and build on and build from your material. And you belong to it rather than it belonging to you by the end—that’s how it feels.

So it’s you respecting your counterpart, you’re becoming an object where you had been a subject, you’re seeing someone but you’re also being seen. And this thing that happens is in the middle and takes shape from the relationship, takes shape as that relationship.

Margaree Little’s poems have appeared in American Poetry Review, Beloit Poetry Journal, New England Review, The Missouri Review, The Southern Review, and Quarterly West.  She graduated from the Program in 2012 and lives in Tucson.

An Interview with Alumnus Tommye Blount
Scroll to top