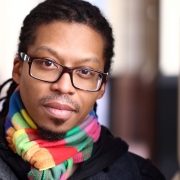 Raised in Southern California and currently living in Brooklyn, Nathan McClain (Poetry 2013) is the author of Scale, his debut collection published earlier this year by Four Way Books. His work has appeared or are forthcoming in Callaloo, Ploughshares, Sou’wester, Iron Horse Literary Review, Southern Humanities Review, Waxwing and elsewhere. A Cave Canem fellow, Nathan is also the recipient of scholarships from the Bread Loaf Writers’ Conference and The Frost Place.

In poems like “Fire Destroys Beloved Chicago Bakery,” you reveal intensely personal meanings in non-living things. In this case, the word fire is “misread” as father. Tell us about your process of bringing what most might call “inanimate” things to life?

What pleased (and surprised) me most about the “Fire Destroys…” poem, which takes its title from an actual newspaper headline, is the imagination of the poem’s speaker. More specifically, how the speaker’s imagination, in significant ways, betrays him. I love how detail functions in a poem (in my own, sometimes, I love it to a fault), and in this poem, I hope the emotional and psychological spate of the speaker’s mind and being are made accessible not only in what is seen but how the thing is seen.

I hope the poem effectively wrestles with heartbreak and turmoil, sure, but I also hope it creates connection, engagement, and empathy within the reader. I believe the various “misreadings” of the speaker create those effects. What seemingly brings these inanimate objects (though fire is quite lively) to life is the speaker’s own imagination, which betrays his emotional state. In writing the poem, learning to see held a certain importance; however, learning to frame what I saw was even more crucial.

The order of your poems in Scale is interesting. “After Word of My Uncle’s Illness”—in which there is prayer over pasta—is followed by “Gluttony.” Later, disciples are “awaiting the return of another man,” while “a man waited” in the next poem. What effect do you like to create while ordering your poems?

I hope interesting is good, haha. I give a great deal of thought to the structure of each individual poem; part of that is to cause the reader to ask questions of the poem which, I believe, binds the reader to the work. But there should also be a reason a poem begins where it begins and ends where it ends, right? We read poems sequentially, line by line, moment by moment, but our goal is to see the poem in its entirety, all at once. We reread the poem, hoping to the see its middle, or some of its more obscure details, with a new understanding, with greater importance. And if we discover there are details that have no real function in the poem, the speaker’s, the poet’s credibility is blown. This is the long answer to your question.

I believe it was Rick Barot who said, “If a book has 39 poems in it, the book, as a whole, should be the 40th poem.” As the parts of a poem contribute to its whole, I intended the same effect when ordering the collection. I hoped earlier poems might inform later poems in the collection, yes, but also that the structure might create a narrative and emotional arc for the reader to track. As an individual poem is unveiled from one line to the next, I hoped the reader would learn more about the book’s characters, its concerns, and its stakes from one poem to the next.

Interesting is definitely a good thing! You’re a native of Southern California, currently live in Brooklyn, and teach on Staten Island and in New Jersey. How does your location influence your work, and/or how you work?

Ha, I am all those things, yes; I guess I’ve gotten around. I’m afraid this will probably be another lengthy response as there are a few things to say about how place contributes to my work. Initially, I hope location serves as a type of grounding for the reader, but also that it provides a sense of atmosphere—that the details present materials the reader can engage, causes the reader to invest him or herself in the poem. Many of the poems have their location in Southern California, where I was raised and spent many years as an adult, but some poems also have their settings in Upstate New York or Mexico.

Each poem’s location, I hope, also contributes to the poem’s overall tone, which is of the utmost importance to me as a poet. I want my poems to communicate deep feeling, an emotional resonance and nuance, and I believe the landscape, in addition to the language, communicate that feeling.

Speaking of Southern California, the title poem in Scale takes place at the Griffith Observatory in LA, where a seismograph reports people’s weight—at least, it’s supposed to. How did this work also become the name of your collection?

“Scale” ​is a poem I ultimately decided should be worked towards in the collection. I liked that the poem could highlight many of the collection’s concerns without necessarily explaining or detailing the central characters. It remains an important poem to me.

Your poem, “Days After the Election, We Finally Discuss the Weather,” is part of Yes, Poetry’s #NotTrump series. Tell us about how your participation in the series came to be.

It’s funny, I don’t typically write overtly political poems (although, sure, the act of writing itself is political), and this poem probably isn’t loud, in terms of its politics, I don’t think. Joanna C. Valente, lovely human being, talented poet and great literary citizen, was gracious to accept the poem for the project (which I’d followed and felt the poem perfect for) and gave it such a great platform. The poem came pretty quickly, and mostly realized. The emotion, as you might imagine, is complicated.

“Nighthawks by Edward Hopper” is incredibly moving. Figures in the iconic painting are identified as members of the speaker’s family. What role has this painting played in your life, and what made you realize you wanted to examine it in verse?

Thank you for your kind words about the Nighthawks poem (a gin cocktail was recently created with the same name for a reading I recently participated in). Each of the ekphrastic poems in the collection is approached differently, I think, approached from within the painting as opposed to without. It’s a painting I’ve carried around in me for a long time, largely because of the painting’s solitude, its closeness to establishing touch or connection and its failure thereof. It’s a painting I always return to, a painting whose tone, if you could call it such, I feel quite deeply. That loneliness, even in the midst of company. The other ekphrastic poems in the collection, the paintings that is, are a bit more obscure, so I thought it a good idea to include a painting that was slightly more recognizable; it also simply spoke to my obsessions within the book and allowed a bit more information to be introduced about the book’s other characters, particularly the figure of the mother. Admittedly, I probably shouldn’t see things as I do. I can’t help it.

I love your asides. (Like, “(isn’t there always a her to please?)”.) How do they find their way into your poems?

Ha, thank you for that. There are a few different ways and reasons I use the parenthetical in the collection, or in any of my poems (and I use them frequently). In the instance you cite, my intention was to provide a bit of counterbalance for a section of that poem, to prevent it from becoming overly sentimental; the parenthetical is often quite useful in that regard. I also hope my use of the parenthetical enacts the speaker’s/poet’s mind in action, as it moves from one thought to the next. It’s interesting, in writing, the parenthetical suggests that what’s written inside is not important or necessary to the text as a whole, but it’s the exact opposite, right? What’s in the parenthesis is highlighted, attention drawn to it. I like how, particularly in quiet poems, how the parenthetical aside can function to deepen a sense of tone.