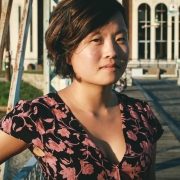 Tiana Nobile (poetry 2017) is a recipient of a 2017 Rona Jaffe Foundation Writer’s Award, the Lucy Grealy Prize for Poetry from Sarah Lawrence College, and a fellowship from Kundiman. Her poetry has appeared or is forthcoming in The Collagist, Poetry Northwest, Apogee, Hyphen Magazine, and the Texas Review, among others. A Pushcart Prize nominee, Nobile lives in New Orleans, where she also works as a teaching artist and arts coach.

Antenna is an art and writing collective here in New Orleans, and they had an open call for chapbooks that exist at the “intersection of visual and literary arts.” I had already written the series of poems that appear in the chapbook and thought they would pair well with a visual component. I reached out to Brigid, a friend who is also an artist, and asked if she’d be interested in working together, and she was! Though the poems came first, the process was still very collaborative. Brigid and I met many times throughout her art-making to talk about our shared vision for the project.

For years I kept an ongoing list of insulting, invasive, racist/sexist/fucked up things people said to me in a note on my phone. At first, it was just a way for me to document these experiences and to acknowledge, even if just to myself, that they happened and that I’m not invisible. Most of the time when someone says something like that to me, I’m temporary immobilized. Should I shout? Cry? Run away? Ultimately, I usually end up doing nothing; I bite my tongue and wait for the moment to pass while my blood boils under my skin. When I learned about the phrase and meaning of “the spirit of the staircase,” I was really inspired. Each poem was written with its particular quote in mind, so I do think of them as a kind of response. The process of writing this series felt like my chance to take some of my agency back, to challenge the power of being rendered silent, to say I do have a voice.

I first learned about the phrase “the spirit of the staircase” during a Warren Wilson residency. I think it was Matthew Olzmann’s class in July 2016.

The process of writing these poems was actually incredibly liberating, which I didn’t expect. To take time to sit with experiences that had made me feel so vulnerable and to finally take some power back enabled me to release some of the pain they had initially wrought.

Thanks! Receiving the Rona Jaffe Award was such an honor. I was filled with a lot of post-MFA uncertainty, and receiving this award was so affirming and came just at the right moment. One major opportunity that this grant will make possible is a trip to South Korea. In many of my poems, I explore the complexities of adoption and dislocation, but the literal landscape of my birthplace is visibly absent. I’m so looking forward to traveling to Korea for the first time thanks to the immense generosity of the Rona Jaffe Foundation.

The title is taken from an article that appeared in The Guardian in November 2014. The article describes a report in which scientists discovered that Chinese adoptees, who have no conscious understanding of the language, show the same brain activity as native speakers when hearing common tones found in Chinese languages. I thought it was so fascinating that somewhere in the deep recesses of my brain I could have retained a memory of a language that I acquired in utero. This study also underscored for me the tension between what we gain and retain versus what we lose during childhood/infancy, and that idea was the catalyst for the poem.

That’s a great question. As an adoptee, there is so much unknown that I have to reckon with. For a long time, I considered those unknowns as barriers to writing about it. One method I started using in order to combat this was to release the unknown and fill it with something new. Once I gave myself this permission, I was able to let go of my insecurities and preconceived notions and expectations, and I wrote feelings and ideas into details and images. By not feeling beholden to a truth that was inaccessible to me anyway, I allowed myself to take ownership over the mystery and construct my own truth.

Q & A With Adrienne Perry
An Interview With Poet Nathan McClain