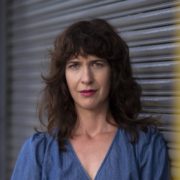 Anna Solomon is the author of the novels The Book of V., Leaving Lucy Pear, and The Little Bride. Her short stories, essays, and criticism have appeared in One Story, Ploughshares, The New York Times Magazine, The New York Times Book Review, Tablet, The Los Angeles Times, and Slate, among other publications. Co-editor with Eleanor Henderson of Labor Day: True Birth Stories by Today’s Best Women Writers, she is the recipient of fellowships from MacDowell, Yaddo, Bread Loaf, and elsewhere, and has twice been awarded the Pushcart Prize. Previously she worked as an award-winning journalist for NPR’s Living On Earth. Anna holds a BA from Brown University and an MFA from the Iowa Writers Workshop.