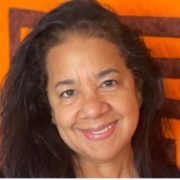 Carolyn Ferrell is the author of the novel Dear Miss Metropolitan (Holt, 2021) which was a finalist for the PEN/Hemingway Award for Debut Novel and the PEN Faulkner Award for Fiction. Her story collection Don’t Erase Me was awarded the 1997 Art Seidenbaum Award for First Fiction of the Los Angeles Times Book Prizes, the John C. Zacharis First Book Award given by Ploughshares, and the Quality Paperback Book Prize for First Fiction. Ferrell’s stories and essays have been anthologized in The Best American Short Stories 2018 and The Best American Short Stories 2020, edited by Roxane Gay and Curtis Sittenfeld, respectively; The Best American Short Stories of the Century, edited by John Updike; Children of the Night: The Best Short Stories by Black Writers, 1967 to the Present, edited by Gloria Naylor; Apple, Tree: Writers on Their Parents, edited by Lise Funderburg; and other places. She is the recipient of grants and awards from the Fulbright Association, the Bronx Council on the Arts, the National Endowment for the Arts, the Corporation of Yaddo, and Sarah Lawrence College. Since 1996, she has been a faculty member in both the undergraduate and MFA programs at Sarah Lawrence; she joined the Warren Wilson faculty in January of 2020.