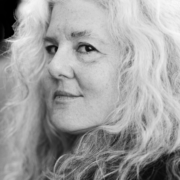 Dana Levin is the author of four collections of poetry, most recently Banana Palace (2016), which was a finalist for the Rilke Prize. Her first book, In the Surgical Theatre, was chosen by Louise Glück for the 1999 American Poetry Review/Honickman First Book Prize and went on to receive numerous honors, including the 2003 PEN/Osterweil Award. Copper Canyon Press brought out her second book, Wedding Day, in 2005, and in 2011 Sky Burial, which The New Yorker called “utterly her own and utterly riveting.” Sky Burial was noted for 2011 year-end honors by The New Yorker, the San Francisco Chronicle, Coldfront, and Library Journal. Levin’s poetry and essays have appeared in many anthologies and magazines, including Best American Poetry, The New York Times, Los Angeles Review of Books, Boston Review, The American Poetry Review, Poetry, and The Paris Review. Her fellowships and awards include those from the National Endowment for the Arts, PEN, the Witter Bynner Foundation and the Library of Congress, as well as from the Lannan, Rona Jaffe, Whiting and Guggenheim Foundations. Levin currently serves as Distinguished Writer in Residence at Maryville University in St. Louis, where she lives. Her fifth book, Now Do You Know Where You Are, will be published by Copper Canyon in Spring 2022.