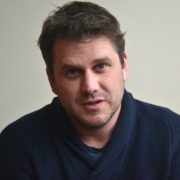 Dean Bakopoulos’ first novel, Please Don’t Come Back from the Moon (Harcourt, 2005), was a New York Times Notable Book; Bakopoulos co-wrote the film adaptation, which premiered last year at the Los Angeles Film Festival. His second novel, My American Unhappiness (Houghton Mifflin Harcourt, 2011) was named one of the year’s best novels by The Chicago Tribune, and his latest novel Summerlong (Ecco, 2015) made the independent bookstore bestseller list. The recipient of a Guggenheim Fellowship and two National Endowment for the Arts fellowships, Dean is now writer-in-residence at Grinnell College in Iowa, where he lives with his spouse, novelist Alissa Nutting, and their blended family of three kids. Dean and Alissa are now at work on a television series based on Alissa’s novel, Made For Love.