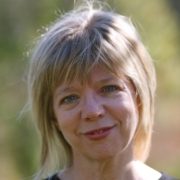 Debra Allbery received her MFA from the University of Iowa and her MA from the University of Virginia. Her first collection of poetry, Walking Distance, won the Agnes Lynch Starrett Prize and was published by the University of Pittsburgh Press. Her collection, Fimbul-Winter, was published by Four Way Books in October 2010 and won the Grub Street National Book Prize in poetry. Her poems have appeared in Poetry, Yale Review, Kenyon Review, Iowa Review, New England Review, The Nation, FIELD, TriQuarterly, and elsewhere. She has twice received fellowships from the NEA; other awards include the “Discovery”/The Nation Award, a Hawthornden fellowship, and two grants from the New Hampshire State Council on the Arts. She has taught writing and literature at Phillips Exeter Academy, Interlochen Arts Academy, Randolph College, Dickinson College, and the University of Michigan. Deb first taught in the Program in 1995; she became the director in June 2009.