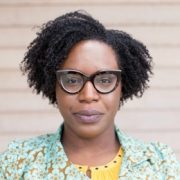 Lesley Nneka Arimah is the author of What It Means When a Man Falls from the Sky, a collection of short stories from Riverhead Books. Her collection was named one of the best books of 2017 by NPR, The Guardian, The New Yorker, Publishers Weekly, Shelf Awareness, LitHub, and more. Her stories have been honored with a National Magazine Award, the Caine Prize, a Commonwealth Short Story Prize, and an O. Henry Award. Arimah’s work has appeared in The New Yorker, Harper’s, McSweeney’s, and GRANTA among other publications, and has received support from The Elizabeth George Foundation, MacDowell, Breadloaf and others. What It Means When a Man Falls from the Sky was selected for the National Book Foundation’s 5 Under 35 and won the 2017 Kirkus Prize, the 2018 New York Public Library Young Lions Fiction Award, and was selected for the New York Times/PBS book club among other honors. Arimah is a 2019 United States Artists Fellow in Writing. She lives in the Midwest and is working on a novel about you.