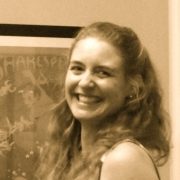 I was in a slump, checking Hotmail for distractions, when I saw the news about the post-graduate option in the MFA Program for Writers.

“Am I too old to apply?” I asked then-coordinator Amy Grimm.

“You’re only too old if you’re dead,” she said. I checked the non-fiction box and mailed the application the next day.

I had left one vocation (urban, academic) for another (bucolic, yogic). Beyond my office corner I could see the Berkshire Hills once enjoyed by Hawthorne, Melville and Edith Wharton. To pay the bills I booked musical acts at a large retreat center where I also taught writing classes (“Haiku Stew” and “What’s Your Story?”) about letting ideas come forth in a messy fashion and allowing the internal editor to pipe down—classes useful for yoga guests and useful for me, initially. I craved pointed critiques. I wanted to interact with humans interested in structural decisions within a manuscript and the merits of summary versus scene. I wantedto be a student again.

When I’d arrived in Swannanoa in 1999 to begin my MFA, I’d intended to write memoir. Everyone thought this was a bad idea, especially my parents. Instead I wrote short stories about ex-patriot entertainers. I was an ex-patriot entertainer. I lived between residencies in Hilton hotels in Thailand, Japan, China and the United Arab Emirates, crooning from 9:00 pm to 1:00 am in lobby lounges. How good it was to fall into the intellectual rigor and affable community in Swannanoa, so different from the late-night debates with inebriated hotel guests about the merits of Celine Dion.

Since then, I’d written and published an autobiographical novel; I’d tried not to tally the rejection notices my second novel had generated. (23 or so.) I’d started a memoir and was 100 pages into a circuitous draft, one that seemed a lot like Eat, Pray, Love.

I rejoined the Swanannoan community as a post-grad in January 2014, where the student dorms retained their funky charm and the cows mooed on the campus farm. I hoped someone would tell me what to do with my memoir draft. But in typical Wally fashion, I had to do the work myself. Guided by fiction writer and memoirist Jeremy Gavron, I was able to re-assess the “aboutness” of my draft and remember why it remained an important story to tell. Jeremy asked hard questions I couldn’t ignore. Regarding his own memoir-in-progress, he shared personal insights and excerpts, which gave me the courage to reveal more of myself in my prose.

Building a prologue helped. I looked at memoir beginnings (The Mercy Papers, Fierce Attachments, The Mistress’s Daughter) and found, as per Jeremy’s observation, “the DNA” for these books spelled out in useful ways. He then suggested several memoirs I couldn’t stop writing about (The Suicide Index, Taking It Like a Woman). The working journal, an alternative to annotations, was an ideal format for my critical writing, as it allowed me to meanderand experiment. I was keen to use my analytical chops again (or see if I still had them) and discussed 19 titles over the course of 106 pages, frequently drifting into personal anecdotes. Jeremy noticed a distinct voice emerging in my journal and suggested I apply it to my memoir. A reflective point of view surfaced, one that allowed my narrator to describe a given experience and comment on the experience. I found I could shape key moments from a place of understanding and accountability.

Jeremy also recommended that I use the journal form in my draft. (Why not think of memoir sections as short “entries”?) By focusing on smaller segments, I found I was able to develop streamlined pieces. I could begin to consider why (or if) each memory was relevant.

In an early packet exchange, my supervisor offered an encouraging reminder. “I wish I could play that on permanent loop,” I wrote back. The next email response contained an mp3 file with Jeremy intoning in his English accent: “I don’t, and I don’t think you should, have any qualms about this…. I don’t think you should worry that the story risks being clichéd or sentimental or about literariness or about what others say. You are a good writer; this is good material. You will write a good book, a book that might have elements of a ‘yoga memoir’ but will be more fundamentally a Lara memoir.”

I play it often from my office corner overlooking the Berkshire Hills.

The next applications for the Post-Graduate Semester are due on March 15, 2015.  For more information and to download application materials, please click here.

A Conversation with Poetry Alum Brian Blanchfield
Scroll to top