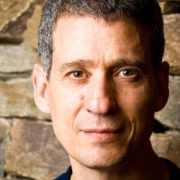 Jeremy Gavron’s fourth novel, Felix Culpa, was published in the US in 2019. His investigation into his mother’s suicide, A Woman on the Edge of Time, out now in paperback in the US, was a book of the year in newspapers in the UK, Australia, and the Netherlands, and a finalist for the Gordon Burn Prize. A BBC radio dramatization aired in June 2019. His previous books include King Leopold’s Dream, a New York Times Notable Book, and The Book of Israel, winner of the Encore Award. Educated at Cambridge University and NYU, he started out as a journalist and was a correspondent in Africa and Asia. He has been writer-in-residence in a prison, a hospice, and at University College in London, where he lives with his wife and sometimes their two daughters.