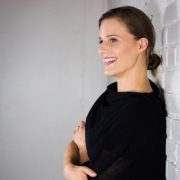 Lauren Groff received a BA from Amherst College and an MFA from the University of Wisconsin-Madison. She is the author of two story collections and three novels. Her most recent collection, Florida, won the Story Prize and was a finalist for the National Book Award and Kirkus prize; her most recent novel, Fates and Furies, was a finalist for the National Book Award, the National Book Critics Circle Award, the Kirkus Prize, and won the American Booksellers’ Association Fiction Book of the Year Award, as well as France’s Grand Prix de L’héroïne. Her short fiction has won a PEN/O. Henry Prize, a Pushcart Prize, and the Paul Bowles Prize from Five Points, and her stories have appeared in journals including the New Yorker, the Atlantic Monthly, Tin House, One Story and Ploughshares, as well as in five editions of the Best American Short Stories anthology and the book 100 Years of the Best American Short Stories. She was a Guggenheim and Radcliffe Fellow, was named one of Granta’s Best of Young American Novelists. Her work has been translated into thirty languages.