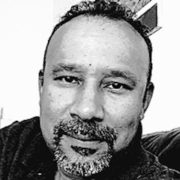 Dale Young received his BS in Molecular Biology and English from Boston College and both his MFA and MD from the University of Florida. He completed his medical residency in Radiation Oncology at the University of California San Francisco. He currently administers his own medical practice and practices medicine full-time. A recipient of the Stanley W. Lindberg Award for Literary Editing in 2014, he edited poetry for New England Review from 1995-2014. In 2017, he was awarded the Hanes Award in Poetry by the Fellowship of Southern Writers. He is the author of five collections of poetry, the most recent being Prometeo. His novel, The Affliction, was published in early 2018. A recipient of fellowships from the National Endowment of the Arts, the John Simon Guggenheim Memorial Foundation and the Rockefeller Foundation, his work has appeared in many anthologies and journals, including several volumes of The Best American Poetry, Asian American Poetry: The Next Generation, The Atlantic Monthly, The New Republic, Ploughshares, and Poetry.